Gender bias is one of many forms of algorithmic discrimination. However, decades of feminist scholarship have shown that gender bias in digital environments is neither new, nor is it only about questions of gender alone. Indeed, data feminists raise broader questions about inequalities, knowledge and power in the digital age. 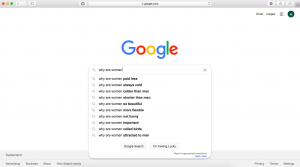 Women are short, beautiful, always cold, not funny and attracted to men. This, at least, is what Google suggests as I type the words “why are women” into my browser from a Swiss IP address in November 2020 (see Figure 1). My Google-search is inspired by Safiya Umoja Noble’s Algorithms of Oppression – How Search Engines Reinforce Racism (2018). In her book, Noble investigates “the implications of the artificial intelligentsia for people who are already systematically marginalized and oppressed” (p.3) and how this presents a threat to democracy at large. For instance, Noble discusses how Google’s search algorithm perpetuates racist and sexist stereotypes of “black girls”, “Latinas,” and “Asian girls” in particular (p.11), arguing that “algorithmic oppression is not just a glitch in the system but, rather, is fundamental to the operating system of the web.” (p.10)

Noble is not the only one to point to the problem of gender-based discrimination in digital and datafied environments. The recent report entitled “AI and Gender” by Clementine Collett and Sarah Dillon at the University of Cambridge (2019) shows contemporary AI systems do not only raise challenges for gender equality in the context of search engines, but also in areas like humanoid robotics and virtual personal assistants, pointing to problems such as biased datasets or the disparities of a predominantly male and white AI workforce.

Others have demonstrated how data-related gender-based discrimination can have real, material consequences that are awkward at best and life-threatening at worst. In Invisible Women: Exposing Data Bias in a World Designed for Men (2019), Caroline Criado-Perez assembles a variety of examples of what she calls a “gender data gap”. Criado-Perez demonstrates how since the ancient Greeks, Western science and medicine commonly takes the average male body to stand in for the “normal” human body as such. As a result, women (as well as men and non-binary people whose bodies do not conform with this standardised norm) are disadvantaged in a variety of ways – from smartphones that are too large for women’s (on average) smaller hands, to the misdiagnosis or mistreatment of women’s health issues due to a lack of data regarding the specificities of women’s bodies. Clinical trials on heart failure, for instance, commonly include mostly male participants, which led to 50% of female patients being misdiagnosed in the UK.

Respective problems do not only occur where majority male data sets are used to infer and make recommendations about the treatment and diagnosis of all human bodies. It is also visible in the lack of data when it comes to specific women’s issues. D’Ignazio and Klein’s Data Feminism (2020) cites the example of Black women’s higher risk of complications and death during childbirth – an issue which is difficult to address in the absence of respective data sets regarding the maternal health of Black women. How come, the authors wonder, that there is no system in place to track complications during childbirth when there are existing processes to measure other health issues such as heart attacks or hip replacements, D’Ignazio and Klein ask?

What starts to become visible here, is that data feminism is about more than gender bias: data feminism raises fundamental and more general questions about the role of knowledge and power in datafied environments. D’Ignazio and Klein thus define data feminism as “a way of thinking about data, both their uses and their limits, that is informed by direct experience, by a commitment to action, and by intersectional feminist thought. The starting point for data feminism is something that goes mostly unacknowledged in data science: power is not distributed equally in the world.” (2020, p.8) Hence, if we want to understand power inequalities in the context of contemporary datafied environments, the authors argue, we need to ask a series of “who questions” (p.26, original emphasis), such as “who produces data”, “whose data is measured” and “who benefits from a particular set of data”. In other words, we need to consider wider issues of power and privilege and how they play out in the particular context of data collection and analysis.

Importantly, D’Ignazio and Klein are not the first to raise such issues. Their idea of “data feminism” stands in dialogue with a long history of “cyberfeminism”. Indeed, feminists have occupied the internet for a long time, as Mindy Seu’s impressive and extensive cyberfeminist catalogue (2020) clearly demonstrates: From Donna Haraway’s seminal Cyborg Manifesto (1985) in the 1980s to Black Cyberfeminism (for instance, McMillan Cottom, 2017) and all the way to Legacy Russell’s queer Glitch Feminism from 2020, cyber-, cyborg and data feminists have tackled deeply philosophical accounts, complicating the relationship between the human and the non-human as well as questions of universality, the body and sexuality and often include concrete, political calls for resisting (digital) patriarchy and (data) capitalism.

While covering a range of subjects, what all of these accounts share is their desire to disrupt the digital status quo. For digital feminists, the internet can be both a space for liberation from gendered and other binary stereotypes as well as a space that perpetuates precisely such forms of discrimination, which they seek to resist. In any case, however, they understand the web as a political space. Thus, more than a theoretical tool to understand how data is produced and how power operates in datafied environments, data feminism also seeks to find alternatives and practical ways of resisting digital patriarchy and datafied inequality. In other words, data feminism is not only a theory, but also a politics – what cyberfeminists have called the YACK (readings) and the HACK (activism) (see Seu, 2020).

Seu’s living archive of cyberfeminism is but one example of cyber- or data feminist principles being enacted by a variety of feminist actors and community organisers around world. As part of her politics, Seu notes who designed her index’ font (Arial by Robin Nicholas and Patricia Saunders, which is “one of few system fonts designed by a woman”, as Seu points out). Other examples of data feminism in action include support networks like Virtual Sisterhood (see Seu, 2020) or reproductive justice groups led by Black women, such as SisterSong or the Black Mamas Matter Alliance (see D’Ignazio and Klein, 2020, p.22). Contributing to further tracing and understanding such and other alternatives to the injustices perpetuated by the algorithmic status quo is one of the key aims of our Human Error project.